Boccia is a Paralympic sport. It is highly competitive and is fun for able bodied as well as disabled athletes. Boccia can be played individually, Pairs (2 on a team) or Team (3 on a team). Boccia is a throwing sport. The balls can be thrown or put in play with a ramp. The court can be any size for recreational play. It is 10m by 6m for competition.  For a graphic representation of boccia see https://youtu.be/itPWqcx7xBg.

THE OBJECT IS TO GET AS CLOSE TO THE WHITE JACK BALL AS POSSIBLE.

Boccia can be played one-on-one, in Pairs or in Teams of three. It is played on a specially marked court indoors on a tile surface or wooden gym floor. The object of the game is to throw or roll leather-like balls so that they land as close as possible to a target ball called the Jack. You sit next to your opponent on the boccia court. Each side get 6 colored balls, red or blue. Red goes first. A coin toss determines whether the player uses red or blue balls and rules designate which playing boxes are used for red or blue. 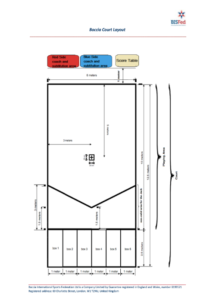 They follow up with their colored ball getting as close to Jack as possible. The opponent then throws trying to get closer. The player or team that is not closest to the Jack must then throw until they put a ball closer to the Jack. This order of play continues until all balls are thrown. Athletes can knock balls out of the way in order to become closest. They can push their own ball in closer to the Jack. When all balls have been thrown, a referee determines the points awarded for that end. The color that is closest to the Jack receives the number of points equal to the number of balls that they have closer to the jack than their opponent’s closest ball. The score accumulates for a number of ends specified in the rules for each division.

The international Boccia competition rules are provided by the Boccia International Sports Federation (BISFed) and apply to all international competitions held under the auspices of BISFed. These competitions comprise all events sanctioned by BISFed and include: Regional Events, World Open Events, Regional and World Championships and Paralympic Games.

In 2018 USA Boccia sponsored a team of three undergraduate students from the California Polytechnical State University, San Luis Obispo to prepare a detailed report on the design and construction of ramps for BC3 boccia athletes.
The following are excerpts from this report. For the complete report click here.

Executive Summary: In this report, the design process in creating an assistive device for Boccia Classification 3 (BC3) players is outlined. The initial research steps, including research into the rules of the game, capabilities of the players, and existing products is documented to show where ideas for the product stemmed from. This transitions into requirements that USA Bocci requested, and preliminary designs and ideas for the product. Finally, this report explains the details of the final design, which has been analyzed for safety, ease of use, and ability to function under different conditions. The processes of manufacturing and testing will also be discussed. The overall goal of this report is to condense the findings from the research, design process, and manufacturing process in order to advance the playing capability of BC3 athletes, and to continue making progress in this field of assistive technology.

Balls: Boccia balls are made in a variety of hardness. In terms of weight, they are to be between 0.58 lbs and 0.61 lbs (263 g, and 287 g, respectively). Players generally prefer the softer balls due to the fact that these balls move less on the court. This keeps the balls from being able to be moved into a different position by an opponent’s balls. In terms of circumference, the balls are to be between 0.86 ft and 0.91 ft (262 mm and 278 mm, respectively). There is a new device that will be used to test these balls that requires the ball to roll a certain distance, and fit between a specifically sized set of bars.

Playing Surface: Boccia can be played on several different surfaces including wooden gym/basketball floors, sport court, or a material called “TerraFlex.” Terraflex has a coefficient of friction of 0.6, which is the highest out of all other floor materials

Ramp: The ramp may overhang the edges of the box, but it cannot touch the ground outside of the box. The device, when laid on its side, must be able to fit into a 3.3 ft x 8.2 ft (1 m x 2.5 m) box at the front of the court. At the beginning of each end, the ramp is to be “visibly” moved at least 0.7 ft (0.2 m) to the left and to the right. The ramp is not allowed to have any additions to it that would aid in propulsion, affect the velocity of the ball, or change the orientation of the ramp. Specific examples of banned devices include lasers, levels, brakes, sighting devices, and scopes. The ramp is allowed to have different colors of paint on it, so a center stripe may be painted on the inside

Pointer: Along with the ramp, classification BC3 players are allowed to use a device to help them propel the ball onto the court, referred to as a pointer. Generally, the pointer is a “stick” that can either be attached to their head or held in their mouth. The player is required to have the final, direct physical contact with the ball when it is propelled onto the court. There is no limit on the length of the pointer, and the angle of the device can be moved in anyway.

You can download and view our Ramp Design Guide for assistance.